Learn English by Watching Films: Marley and me (2008)

Marley and me (2008)
Marley & Me is a 2008 American comedy-drama about the titular dog, Marley. It was directed by David Frankel and the screenplay by Scott Frank and Don Roos is based on the memoir of the same name by John Grogan. After their wedding, newspaper writers John and Jennifer Grogan move to Florida. In an attempt to stall Jennifer's "biological clock", John gives her a puppy. While the puppy Marley grows into a 100 pound dog, he loses none of his puppy energy or rambunctiousness. Meanwhile, Marley gains no self-discipline. Marley's antics give John rich material for his newspaper column. As the Grogans mature and have children of their own, Marley continues to test everyone's patience by acting like the world's most impulsive dog.
PRE-WATCHING

I. Why do you think films about pets are so popular?

II. What is your favorite pet film?

III. Watch the trailer of the movie. What kind of dog is Marley?

IV. Dwell on the quotes below: 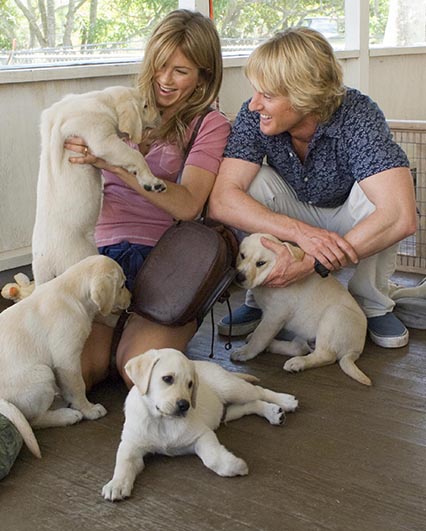 John Grogan: A dog has no use for fancy cars, big homes, or designer clothes. A water log stick will do just fine. A dog doesn't care if your rich or poor, clever or dull, smart or dumb. Give him your heart and he'll give you his. How many people can you say that about? How many people can make you feel rare and pure and special? How many people can make you feel extraordinary?
* * *
Arnie Klein: Tell your dog not to worry, sooner or later we all lose our balls.
*  *  *
Debby: There were 11 thunderstorms while you were gone, 11, you were right, he doesn't like them and just so you know I am a dog person but that is not a dog, that is evil with a dog face that humps my leg and is peeing on your carpet.
*  *  *
Jennifer Grogan: You're part of the plan.
John Grogan: Oh yeah?
Jennifer Grogan: My plan... Step 1: Meet an incredibly sweet, smart, sexy man.
John Grogan: Done. Step 2?
Jennifer Grogan: Marry you instead.

V. Answer the questions:
VI. You are a film critic. Write a review on Marley & Me.