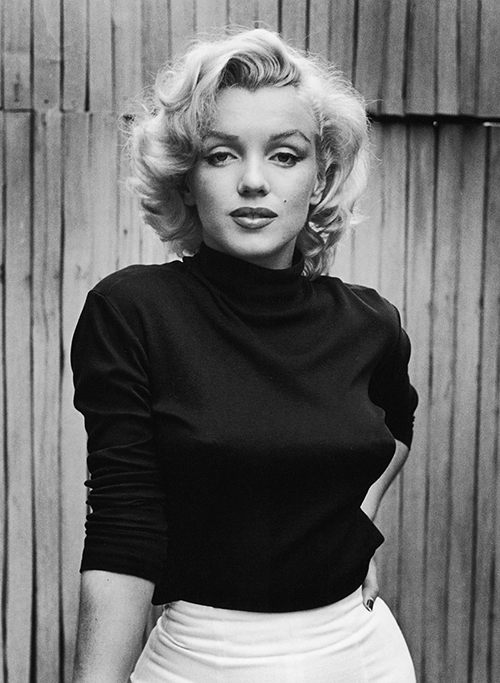 Norma Jean Baker endured a fatherless childhood and poverty. She was put in many different orphanages and foster homes after mother Gladys Baker (n?e Monroe), who suffered mental illness, was institutionalised.
She was born on 1 June 1926 in the Los Angeles County Hospital, the third child of Gladys Baker. She lived with a number of foster parents, as her mother was mentally unstable, until her mother's best friend Grace McKee became her guardian. McKee was inspired by Jean Harlow and allowed the nine-year-old Norma to wear makeup and curl her hair, until McKee married and sent Norma Jean to an orphanage.
The young girl was then sent to live with her great aunt Olive Brunings, where she was treated badly. At 16, she escaped her old life by marrying a 21-year-old aircraft plant worker, Jim Dougherty. The couple divorced four years later. By this time she had begun modelling bathing suits and, after bleaching her hair blonde, was posing for glamour photos.
20th Century-Fox signed her to a contract - at $125 per week for six months - and changed her name to Marilyn Monroe.
After appearing in small parts in films including 'Love Happy' and 'All About Eve', Monroe found fame in 1953 with 'Niagara', 'Gentlemen Prefer Blondes' and 'How To Marry a Millionaire'. Monroe had hit stardom. That same year, she began dating baseball player Jo DiMaggio and married him - a union which was only to last eight months - before filming 'There's No Business Like Show Business' and 'The Seven-Year Itch', the latter featuring the classic scene in which she stood over a subway grating, skirt billowing. She applied for divorce from DiMaggio on the grounds of mental cruelty.
Monroe's work began to slow down, but critics praised her acting in 1956 film 'Bus Stop'. She married playwright Arthur Miller the same year, divorcing him four years later. In the meantime, she fell prey to alcohol and pills.
After a year off in 1958, Marilyn returned to the silver screen for smash comedy 'Some Like It Hot'. 'The Misfits', written by husband Miller, was to be her final film. Work was interrupted by exhaustion, and she was then fired from 'Something's Got to Give' for not turning up for filming. On 19 May 1962, the actress attended the early birthday celebration of John F Kennedy at Madison Square Gardens, singing 'Happy Birthday Mr President' in a performance that became legendary.
She went into seclusion and on 5 August 1962, she was found dead at her home of an overdose of sleeping pills, aged 36. The verdict was suicide but has always been disputed, with countless conspiracy theories triggered by her connection to brothers John F and Robert Kennedy.
Monroe has been portrayed by a number of actresses over the years, including Michelle Williams in 2011's 'My Week With Marilyn'.
Vocabulary exercises
ex. 1 Translate the following words and expressions and make sentences with them
страдать, изображать, носить макиаж, жестокость, спасаться бегством, осветлить волосы, хвалить, в то же время
ex. 2 Explain these words
guardian
orphanage
mentally unstable
to trigger
stardom
to escape
cruelty
ex. 3 Practice the use of “the former/the latter”
Example: I like basketball and football, the former being my father’s favorite team sport and the latter being the sport my uncle played.
ex. 4 Finish these sentences
Comprehension Exercises
ex. 1 Answer the questions
ex. 2 Listen to this audio file. Six people will tell who they would rather be: an athlete, politician, actor, or musician.