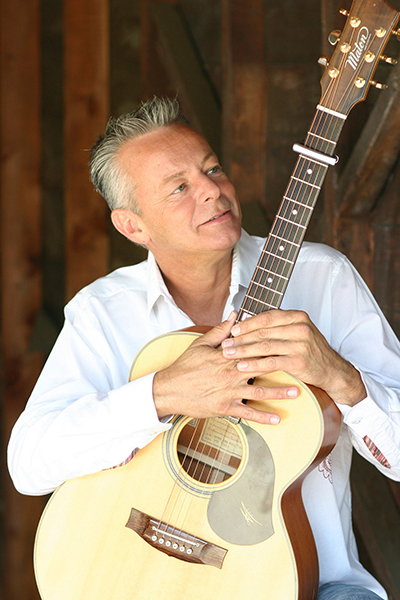 Two-time Grammy nominee Tommy Emmanuel is one of Australia's most respected musicians. His unique style, which he simply calls "finger style," is akin to playing the guitar the way a pianist plays a piano, using all 10 fingers. Rather than using a whole band for melody, rhythm, bass, and drum parts, Emmanuel plays all that - and more - on one guitar. Guitar legend Chet Atkins was one of the first to inspire Emmanuel to try this "fingerpicker" style as a child. Decades later, Atkins himself became one of Emmanuel's biggest fans.
Born into a musical family, Tommy and his older brother Phil were considered child prodigies. Tommy got his first guitar at age four, was playing in family band by age six, and by 10 had played his way across Australia. Leaving school and home in his early teens, he embraced big city life in Sydney and spend the late '70s and early '80s playing club dates and working as a session musician. After that Emmanuel launched his solo instrumental career with the release of “Up from Down Under” in 1987. His career continued to bloom, and toward the end of the decade his popularity began to spill over into Asia, Europe, and eventually the U.S. In 1999, Atkins honored Emmanuel with the title of "Certified Guitar Player" for his contribution to finger style guitar. It was a crowning moment for Emmanuel, and the title is now virtually synonymous with the guitarist himself, the letters "CGP" often appearing in association with his name.
Since the turn of the millennium, Emmanuel's popularity has continued to grow. In all, his catalog includes over 20 musical recordings, spanning the gamut of solos, duets, ensembles, cover tunes, originals, and both electric and acoustic guitar. He has also made numerous live performance and instructional DVDs and regularly teaches master classes on the road. At 57, performing live is more important to him than ever, and he tours constantly, often playing over 300 concerts a year. Guitar players of all levels come to his shows to watch his magic hands work, but his appeal goes far beyond musicians. His live shows are known for their humor, passion, and infectious joy. The power of his charismatic showmanship will be an enduring part of his legacy. Tommy Emmanuel's message is pure love for the music, and he delights in sharing it with the world, one audience at a time.
Interview:
Did you enjoy playing when you were a child?
When I was really young, my father made me play all the time and I resented it because it took away from my play times with my friends. But when I got older, I was fascinated by it and wanted to really try to work out the complicated music — in its own way, it was its own reward.
What's the coolest thing about being 'the guy everyone looks up to'?
I feel privileged to be in a place where people like what I do and look to me as an example to follow. I work very hard to improve my playing and my abilities every day and I feel a sense of responsibility since Chet Atkins awarded me the Certified Guitar Player award. My goal is to entertain as many people as I can in my life and to give the younger generation something solid that they can look to as an example.
Can you seriously see yourself getting any 'better'?
I feel like I'm only just beginning. Like every other player I know, you have good days and bad days, and some days things seem to come easy and some days you really have work to get the level of quality in your playing. The more I play, the more I realize what I need to work on. And so, I go through periods of working only on strength and skill, and then I work on expanding my knowledge and trying to steal a few good tricks from other players. It makes me feel very creative when I'm around other players that I admire.

Five albums. What are they?
Beatles 27 #1s
American Pie - Don McLean
The Atkins-Travis Traveling Show - Chet Atkins/Merle Travis
Chopin's Nocturnes
Bonnie Raitt - Nick of Time
Money, or professional recognition. Which is more gratifying?
You could say money feeds the family and recognition feeds the soul. It's more gratifying to make a difference in someone's life.
If you could have a jam session with any musician, living or dead, who would it be and why?
It would be Django Rheinhart because he's the greatest of all time.

Vocabulary Exercises
ex. 1 Explain the following words and expressions
complicated, unique, child prodigy, decade, numerous, award, pure
ex. 2 Make your own sentences with the following words and expressions
to bloom, to inspire, in his early teens, to launch, numerous
ex. 3 Make sentences with “to be considered”
Example: The book is the most boring. - This book is considered to be the most boring.
ex. 4 Translate
Grammar Exercises
ex. 1 Open the brackets and use appropriate tenses
ex. 2 Use “must/can/should/might/need to”
ex. 3 Turn direct speech into indirect speech
Discussion Points
ex. 1 Answer the questions
ex. 2 Dwell on the following points
“Music is the universal language of mankind.” ? Henry Wadsworth Longfellow
“Music expresses that which cannot be said and on which it is impossible to be silent.” ? Victor Hugo
“Everything in the universe has a rhythm, everything dances.” ? Maya Angelou
“Music is the strongest form of magic.” ? Marilyn Manson