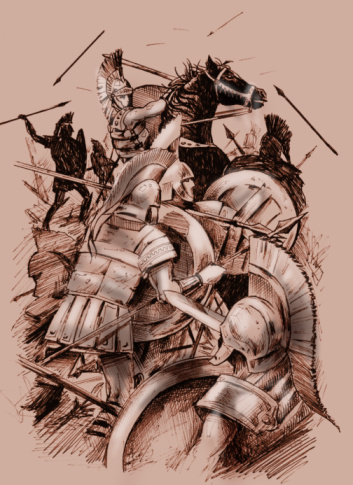 Around 1200 B.C. Paris, Prince of Troy, fell in love with Fair Helen, lovely Queen of Sparta, and kidnapped her. Helen was quite willing to leave with Paris, and the two escaped unnoticed. Helen’s husband Menelaus enlisted his brother, King Agamemnon, in a quest to regain Helen and take revenge on Paris and the Trojans. Agamemnon was chiefly interested in wealth and power and he saw his brother’s wife’s affair as a nice pretext for fighting, and so, they drove their united fleet to what now is Turkey. Agamemnon brought in his tow Odysseus, who was duty bound to fight along and yet quite anxious to get home to his wife Penelope.
The Greeks had been besieging Troy for ten years unsuccessfully, and the army incited by home-sick Odysseus began clamouring for return. That disagreed with Agamemnon’s plan. At this point he called to the walls of Troy Achilles, King of Phthia, a mighty warrior and a commander of a fearful band of soldiers called the Myrmidonians (the Ants). When the Myrmidonians and their leader showed up and attacked the enemy, the Trojans began to yield. But Agamemnon acted foolishly insulting Achilles. He took from him a slave girl who was Achilles’ war booty. Achilles, in a fury, took his soldiers out of the battle and swore he wouldn’t help the Greeks anymore.
For a time the Trojans triumphed. Their commander was Hector, Paris’ elder brother, who tried to protect his native city and his family. Hector was a brave warrior, and the Greeks suffered great losses at his hands. Frightened Agamemnon offered to apologize to Achilles and to return the girl, but Achilles, his pride wounded, stubbornly refused. He sulked in his tent whining to his best friend Patroclus. He didn’t care how many Greeks died. All he cared about was his prestige as a leader and martial glory. Patroclus, however, was greatly distressed by their friends’ plight and he begged Achilles to help them or, at least, to give him his famous armour, since he didn’t want to join the battle himself. Achilles agreed. The plan was that Patroclus, in Achilles’ armour, would lead the Myrmidonians and scare the Trojans back to their city.
Their plan worked. The Trojans, seeing whom they thought to be Achilles, panicked, were defeated and driven to the walls of Troy again, but Patroclus was killed by Hector. When Achilles was told about his best friend’s death, he threw up a hysterics and changed his mind completely. He now entered the battle with the only aim of taking revenge on Hector. In a murderous rage he destroyed hundreds of enemy soldiers, killed Hector in a hand-to-hand combat and himself fell in action.
Meanwhile, Odysseus was desperately seeking means of stopping the war and returning home. He devised a trick to deceive the Trojans. He made the soldiers construct a wooden horse and leave it outside the city gates. Then the Greeks pretended to leave Troy. The Trojans thought that the horse was a sacrifice to their god Poseidon and drove it into the city celebrating the end of war. But at night, when the city fell asleep the Greek soldiers got out of the horse and opened the gates. The city was destroyed and burnt to ashes. Agamemnon was killed, Menelaus was killed, Paris was killed, and Odysseus, for all his pains, didn’t return home until after 14 years. End of story.
I. Answer the questions to the text:
II. Make up a plan of the text.
III. Tell the story of the Trojan War as if you were one of its participants.
IV. Tell what kind of person each of the character was. Select words from the list to describe their personalities. Explain your choice.
Revengeful; ambitious; compassionate; foolish; selfish; courageous; fierce; stubborn; protective; unreliable; emotional; greedy; dominant; dishonest; cunning; proud; kind-hearted; moody; clever; unbalanced; cooperative; (un)faithful.
V. Imagine that you are a historian who has an opportunity to interview the heroes of the Trojan War. Think what questions you would ask them and how they would answer. Would they give you the similar answers for the same questions, or would they answer differently?
You may discuss:
a) the reasons of the Trojan War;
b) relationships between the characters and their aims;
c) personal responsibilities for their actions.