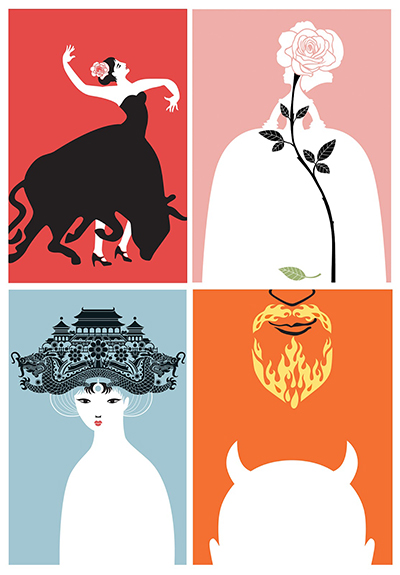 The primary objective in operatic acting is to convince the audience that you are someone you are not, and to do so while you participate in the operatic convention of singing words that in real life (or spoken drama) would normally be spoken. One needs to act so convincingly that the audience becomes unaware of this convention and engages only in the drama and the beauty of the music.

What are the basic rules or procedures involved in acting? It is easier to describe what acting is not. Acting is not pretending, because in acting we bring out what is truly inside us; it is not pretence. At the same time, it is not naturalistic, because the people we portray do not act necessarily as we would act in the same situation. And the natural boundaries of the stage inhibit reality. Actors portray characters, trying to bring them to life, to make them believable for the audience during the tenure of the play. Actors interpret the characters for the audience, bringing the richness of their experience to the portrayal, highlighting aspects of the character's personality and physicality that are important in comprehending the underlying themes and messages of the opera.

Operatic acting means acting while singing in an opera. It means more than that because singing in an opera implies a wholeness of functioning that transforms acting into something different from acting in a spoken drama. The element of music and the physical act of singing demand so much emotional involvement and physical discipline that acting in opera becomes its own art, related to singing and related to acting, yet distinct.

We act all the time.

We don't think of acting because it is so obvious, because it would be like thinking of chewing while chewing. It is so inherent a function of human life that we lose track of it.

Ironically the best actors try to stop "acting," and try to speak or sing or move or act without pretence. The best acting is not acting, or non-acting. It feels like being more myself and less my character. Within each of us lies universal experience from which we draw the necessary ingredients for characterisation. So the character speaks through us, taking over our thoughts and actions; we become the vehicle by which this character finds expression in reality.

In developing a character, I first try to create any emotional and psychic involvement, projecting feelings with energy and not worrying about how accurate they are to the character. At some point I begin the intuitive process of making the character me, or making me the character—I’m not sure which-and grounding the greater involvement of altered state into my being and a heightened energy level into my actions. I know this is happening by the fact that I do less and less and I work toward non-acting, toward becoming myself more and more.

The ground rules of operatic acting are that one must sing and act with total commitment. You must commit yourself physically; also, you must commit yourself emotionally and mentally. Opera requires that we transcend "everyday-ness" and create peak moments emotionally, physically, and mentally. The energy required to sing over an orchestra allows us to act more powerfully. At some point we must surrender ourselves to our roles, feeling the characters take us over and play us, rather than we playing characters. That's the place where technique, interpretation, intuition and inspiration meet. As performers, we are responsible for accuracy and spontaneity in our performing, so that we accurately repeat over and over the intentions of the composer and director while imbuing our performances with spontaneity, emotional and mental freshness, convincing the audience that this is the first time we have sung or spoken the words in this way.

We need to be aware also of the intuitive flow of drama. Drama occurs in tempo, a flow that naturally rises and subsides with the intensity of the action and its direction at the moment. Like musical tempo, the dramatic tempo can quicken or slow, and we need to take responsibility for manipulating the audience's sense of time.

When we sing art songs, we act, but without props, costumes, scenery or external action. Songs require the same complete sincerity of delivery. One must strive to make the dramatic concept more important than the ' music, because drama precedes music. Music always evolves from drama. In songs the visible iceberg of drama is smaller (no costumes, sets, often no continuous plot), but the breadth of drama remains the same as in an opera and the audience must sense this hidden mass in the way we perform.

We can only essay to keep removing insincerity from our performance, from our delivery of lines and melody, of musical phrase. Never should the audience be first aware of the beauty of our voices or of our technique; they should always be caught up in the drama, the conflict, the motivation, or the expression of the internal depths. Only in the background should they notice the beauty and transcendence of what is happening.
ASSIGNMENTS

III. Paraphrase:
-     running-time of the play
-     to focus one's attention on personal and physical traits
-     to be fully engaged with the part inner rhythm of drama
-     to yield oneself to the drama extraordinariness of what is happening
-     to cease to notice something
-     to go beyond the mere routine of life
-     to make the performance seem spontaneous
-     to disregard the convention
-     to vivify
IV. Paraphrase using different wording and grammar:
1.   The primary objective in operatic acting is to convince the audience that you are someone you are not.
2.   Actors bring the richness of their experience to the portrayal.
3.   I work towards non-acting.
4.   Music always evolves from acting.
5.   In songs the visible iceberg of drama is smaller.
V. Translate the following sentences into English:
1.   The natural boundaries of the stage inhibit reality.
2.   It is so inherent a function of human life that we loose track of it.
3.   The best acting is not acting or non-acting.
4.   I begin the intuitive process of making the character me, or making me the character.
5.   Opera requires that we create peak moments emotionally, physically, and mentally.
6.   One must strive to make the dramatic concept more important than the music.
VI. Define the basic components of successful operatic acting in the form of a plan. Explain the meaning of every item.