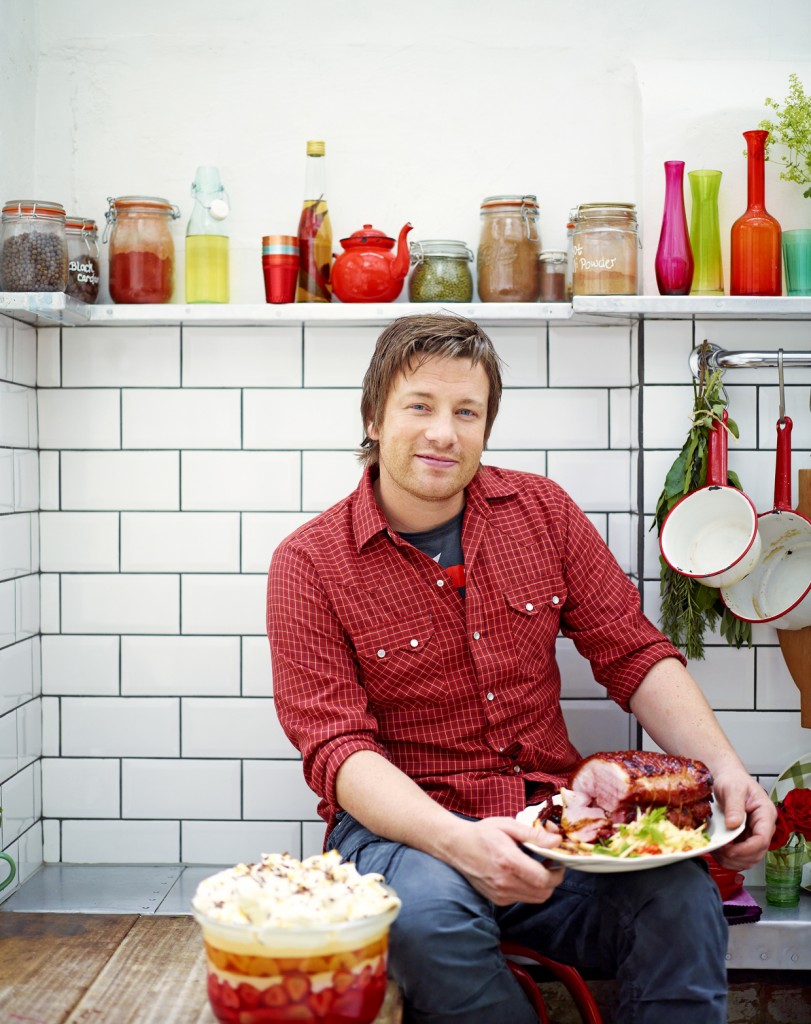 “I'm probably a bit romantic about it, but I think we humans miss having contact with fire. We need it.”
“We're in a situation now where weight and extreme weight and heart disease is the biggest killer in this country today.”

ex. 3 Complete the sentences:
ex. 4 Answer the questions:
Do you remember? Vocabulary on topic "Food"
ex. 1 Explain what the following words and word combinations mean:

ex. 2 Finish the sentences:
ex. 4 Put the verbs in correct form, using Present Continuous, Present Simple or “to be going to”:
ex. 5 Translate:
Reading
Before reading please look through the vocabulary:
bewilderment – потрясение, замешательство
elsewhere – где-либо еще
convenience food - продукты, готовые к употреблению
to urge – призывать, убеждать
groceries - бакалея
limited budget – ограниченный бюджет
to dictate size – диктовать размер
to knock out (an amazing pizza) – состряпать (на скорую руку)
to miss out on something – лишать себя чего-либо, упускать что-либо
Jamie Oliver and Modern-Day Poverty
(an extract from “The Guardian” article)
Jamie Oliver said that he cannot understand "modern-day poverty in Britain". In an interview with the Radio Times, Oliver expressed bewilderment that poorer Britons would choose cheap fast food while spending their money elsewhere.
"The fascinating thing for me is that seven times out of 10, the poorest families in this country choose the most expensive way to hydrate and feed their families. The ready meals, the convenience foods."
Oliver urged people to switch from shopping at supermarkets to buying smaller quantities of groceries from their local market. He said that Britain had much to learn from Italy and Spain about buying fresh produce and eating well on a limited budget. He complained that most people were more loyal to a particular supermarket "than any religion or brand".
"One of the other things we look at in the series is going to your local market, which is cheaper anyway, but also they don't dictate size," Oliver said. "From a supermarket you're going to buy a 200g bag of this or a 400g pack of that. If you're going past a market, you can just grab 10 mange tout (snow peas) for dinner that night, and you don't waste anything."
"I meet people who say, 'You don't understand what it's like.' I just want to hug them and teleport them to the Sicilian street cleaner who has 25 mussels, 10 cherry tomatoes, and a packet of spaghetti for 60 pence, and knocks out the most amazing pasta. You go to Italy or Spain and they eat well on not much money. We've missed out on that in Britain, somehow."
Discuss the following:
Comments:
Research shows that in developed countries obesity is more common the poorer you are; but it also shows that more people are obese in more unequal countries. If our government introduced initiatives to tackle our high level of inequality, it could significantly reduce obesity and improve the health of the country for little or no cost.
Bill Kerry - Secretary, The Equality Trust
Does he really think a single parent trying to hold down two minimum-wage cleaning jobs has time to prepare "something that's been slow cooked" or extract "amazing texture" from stale bread? Sometimes chips and cheese or burgers may be the logical option: they're quick and provide a high calorie content per pound spent. If he really wants to improve the eating habits of poorer Britons, Oliver should turn his attention to inadequate pay at the bottom of our economy.
Simon Samuroff - Harrow, Middlesex
Here in Thornton Heath there are a lot of individuals and families in so-called B&Bs provided by the council; across the country there are many thousands. They have no cooking facilities. Given 30 minutes and any number of ingredients, they cannot cook any food at all. How do those people eat healthily?
John Fullman - London
It's not just schools that should be stopped from selling crisps, Snickers bars and Coke (Bad habits that kill, 28 August). Hospitals are full of shops selling chocolate, crisps and fizzy drinks. It's sometimes hard to find anything healthy in them at all, while in the wards languish people with obesity-related diseases.
Carol Ross - Chipping Norton, Oxfordshire