The Chaser
by Dasha Baranova

Listen to the audio story in English 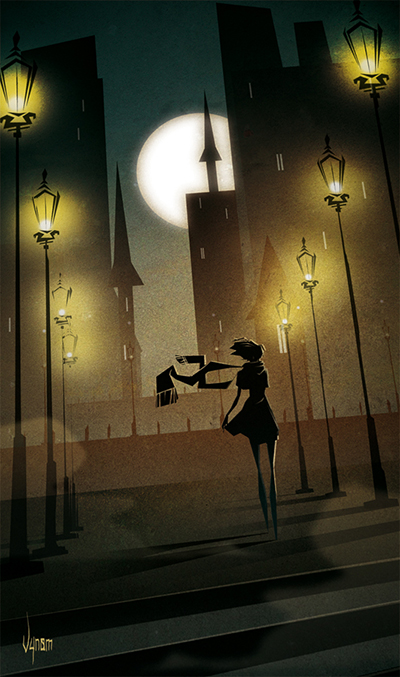 Laura went along the narrow path leading through the park. Girl's heart sank with fear. How could she not be afraid, if he was still following her?

Darkness surrounded her. Cold, chilling to the marrow wind blew and rustled fallen leaves. Just at the end of the road a lonely flashlight created a small circle. Laura rushed to it, trying to pass the unlit place as soon as possible. Her heels clattered loudly on the stone path.

No, she had no time - his footsteps were getting closer and closer and she felt his approach. The girl was afraid to turn around and meet his gaze. She could already hear his breathing. Still a little bit... Still...
- A-a-a, - there was a scream...


- Emily, go for the bread, please, I’m afraid the store will be closed soon.
The girl looked up from the book, holding the page with a manicured finger. The grandmother stood on the doorstep of her little room. It was impossible to refuse, but she did not really want to go, in spite of the fact that the shop was not so far.

- Well, - Emily agreed and put the book down. She hopelessly sighed and put on a coat, then a raincoat, rubber boots and, after a little doubt, a cap: it’s the spring that was coming up, not the summer. And she went out onto the porch, stood for a moment until her eyes became accustomed to the darkness.

She offered to visit the old grandmother for long "May" weekends to help her with the housework while her parents were digging and planting six acres of the country land. Grandmother adamantly refused to move to the city. Emily could have got that if she had lived in the village, but loving a small dirty old hut - it was more than she could understand. Throughout the year there was dust and dirt. Coal dirt was black, which absolutely refused to wash out. Deciding to shorten the way, Emily firmly moved towards the store on a narrow unlit alley along the old abandoned houses, whose residents were only a few suspicious individuals. This way she would enter the shop doors in five minutes, but walking around the store in search of a normally lit road she would spend at least a quarter of an hour.

Not wanting to go to the store tomorrow, Emily bought two loaves of bread, yogurt and salt (grandmother had forgotten, but Emily noticed there was hardly any salt left). She carefully folded all the purchases in a small bag. Although the bag was unsightly – it can’t be compared with a plastic bag with bright design - it had strong long handles. You could bring home all the purchases in it without the fear that at any moment everything would be in a puddle or on the ground. Coming out of the shop she hesitated in the light of its windows, not daring to go back the way she had come here. «No, it is much faster», - Emily decided and went to the alley.

Before she was halfway home, she suddenly heard someone's heavy footsteps. The girl turned around - behind her someone was walking with the hood pulled over his face. Emily went faster. The stranger also quickened his step. Then she almost broke into a run, but soon began to choke - young city lady can‘t escape from the pursuer with a heavy bag in her hands.

- Adolescence is the time to be courageous, - whispered Emily, clutching the bag more comfortably.
And as soon as the stranger came close enough, she turned and brought almost four kilograms of her purchases down on his head. The bag held, nice. The chaser gasped, swayed and fell onto the cold concrete.

- What are you doing? - He said in confusion, holding his head.

- And you? - Emily exclaimed excitedly and again threatened the man with the bag. - Why are you following me?

- I wanted to help. I saw you at the store and thought your purchases would be too hard to carry. I know you, you are Emy, you came to visit your grandmother Anna.

- Sorry, I thought you were a maniac, - she helped the guy to get up.

- What maniacs if everyone here knows each other since childhood?

- I'm sorry – said Emily confused, - let’s go home, I'll give you a cup of tea and put something cold on your head.


- A-a-a, - there was a scream...
Laura lifted up her short skirt to her waist and in a desperate leap hit the maniac with a sharp heel of her new blue shoes…