"Unfaithful" is a 2002 American drama film directed by Adrian Lyne and starring Richard Gere, Diane Lane and Olivier Martinez. It was adapted from the French film The Unfaithful Wife (1968) (La Femme infidele) by the noted director Claude Chabrol. It tells about a couple living in suburban New York City whose marriage goes dangerously awry when the wife indulges in an adulterous fling with a stranger she encounters by chance in Manhattan."Unfaithful" is an intriguing, compelling piece--a real edge-of-your-seat nail-biter!

I. Who do the following words belong to? Recall the situations they were uttered in. 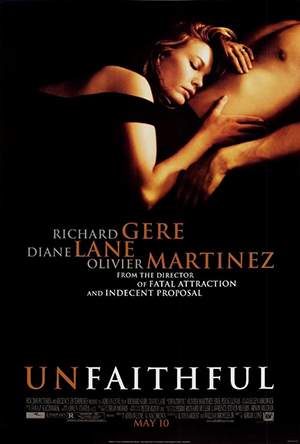 You're in my mind. You're the only thing in my mind when I wake up every morning. You're in my brain before I even open my eyes. lf it's a day when l don't know if I'm gonna get to see you, I'm anxious...thinking of excuses to come to the city to see you.

-   It could be something I did for myself, to broaden my horizons. Like taking a pottery class.
-   An affair isn't like taking pottery.
-   Could be.
-   It would start out like that. Then something would happen. . . . . .someone finds out or someone falls in love and it ends disastrously. They always end disastrously.

I gave everything. . .for this family. Everything. And what did you do? You threw it all away, like it was nothing. For what? You didn't think I'd know? I wouldn't feel it?
I knew it from the very first day.

II. Speak on the following.

1. Where is the scene laid? Who are the main characters of the film?
2. What is the film about? Express your idea in 1-2 sentences.
3. What have you learnt about the protagonist of the film? Do you think Connie Sumner has indeed fallen in love with Paul Martel?
4. Why did Connie agree to come in on their first encounter? Did she really want to thank him when she was calling him one day later?
5. How can you characterize Paul? Did he love Connie? Was he aware that Connie had a family?
6. What about Edward? What can you say about their relationships before she committed adultery?
7. Why did Connie give her lover the souvenir her husband had presented her? Why did Edward take it back even though it was risky?
8. Does it always end disastrously as Connie’s friend said? Isn’t it possible to date somebody on the side so that no one will ever know?

III. Sum up the problem and the idea highlighted in the film. Give your personal attitude to them.