Lingvistov Films in English: Requiem for a Dream (2000) 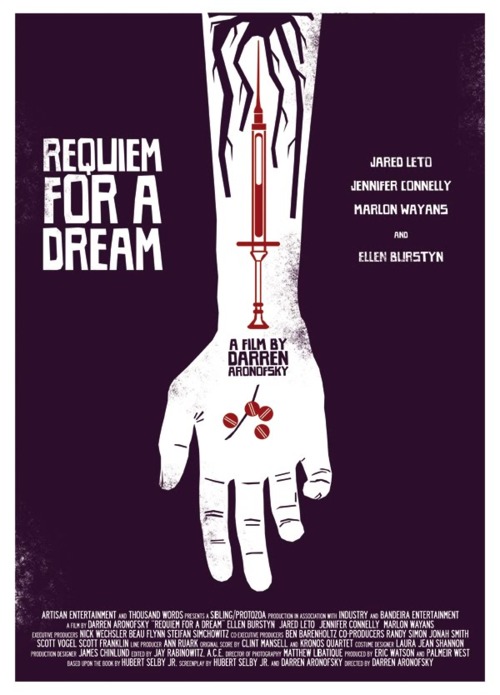 Requiem for a Dream (2000) by Darren Aronofsky. The film is based on the novel of the same name by Hubert Selby, Jr., with whom Aronofsky wrote the screenplay. The film depicts different forms of addiction, leading to the characters’ imprisonment in a world of delusion and reckless desperation that is subsequently overtaken by reality.

You can make watching films in English useful! Here you can find some interesting Speaking exercises on "Requiem for a Dream".

I. Who do the following words belong to? Recall the situations they were uttered in

Ma, ma, ya gotta cut that stuff loose. I'm telling you, it's no good. Do ya wanta be a dope fiend for krists sake? I am telling you that croaker's no good.
*  *  *
- So you want to hear the news?
- What news?
- You got your good news and the bad news. The good news is in a couple of days there's going to be some prime back on the street.
- Really! Who told you that?
- Angel. Yeah, Sal the Geep let go a couple a keys go for the Christmas season. Him being a good Christian he wants no wanting during this glorious season. Until I heard the bad news. The price is doubled and you'll have to cop for weight at least half a piece.
*  *  *
- Do you want your TV?
- Yes, if you don't mind.
- Mrs. Goldfarb...can l ask you a question, you won't take it personal? Why don't you tell already the police?
- Harry wouldn't be stealing no more the TV. Harold's my only child. He's all l have.
*  *  *
- No, Mrs., Goldfarb, I'm absolutely certain,
- But maybe you gave me a weaker one last time.
- That isn't possible, Mrs., Goldfarb, they're all the same potency,
- But something isn't the same.
- You're just becoming adjusted to them. It's nothing to worry about, Mrs. Goldfarb, okay.
*  *  *
- That shit don't look too good. It don't feel too good either, man.
- But a little stuff will take care of that.
- Hey, what's wrong with you. Don't shoot in there. I’ll blow it if l don't.

II.  Speak on the following.

III. Look through the comments on the movie Requiem for a dream. Refute or support the idea expressed.

This ranks up there as one of the three most powerful movies I have ever seen in my lifetime (Full Metal Jacket and Grave of The Fireflies being the other two). This movie shows the brutal honest side of addiction and over-indulgence. Not just drugs, although it heavily shows drug addiction. Also shows how one addiction can lead to another and how damaging it can be for you. I watched this alone, and felt so stunned afterwards, I had to call a friend just to calm my nerves. Seriously, this is a brutal (one more time) BRUTAL film. The acting is wonderful - Ellyn Burnstyn and Jenniffer Connely are just wonderful in this movie, and Marlon Wayons was such a shocker in a serious role. Everyone must watch it, for it's entertainment value, and more importantly, it's educational value. But it leaves chills down your spine for it's honesty and unforgiving lessons.
*  *  *
Drugs kill, and the death is not only physical. They kill focus, they kill the wish to live, they kill the humanity of attitude but most damningly they kill hopes and dreams. Ironically enough, the lead characters of Requiem for a Dream are drawn to drugs seeking a short cut to a life which is beyond them but which they yearn for. Eventually this very short cut paves the way for their downfall.

An old lady's dream to be on TV, a young man's urge to be rich and happy, his friend and girl friend's need to tag along while aspiring to live a rich life - all these dreams die an untimely death. However, the audience is not subjected to any drama. The narrative is evenly paced, and realistic with some exceptional cinematography making the viewing experience a delight. The end is tragic, realistic, and painful but every bit true. Conforming reality to art is as much a challenge as conforming art to reality and on both counts this movie comes out on top.