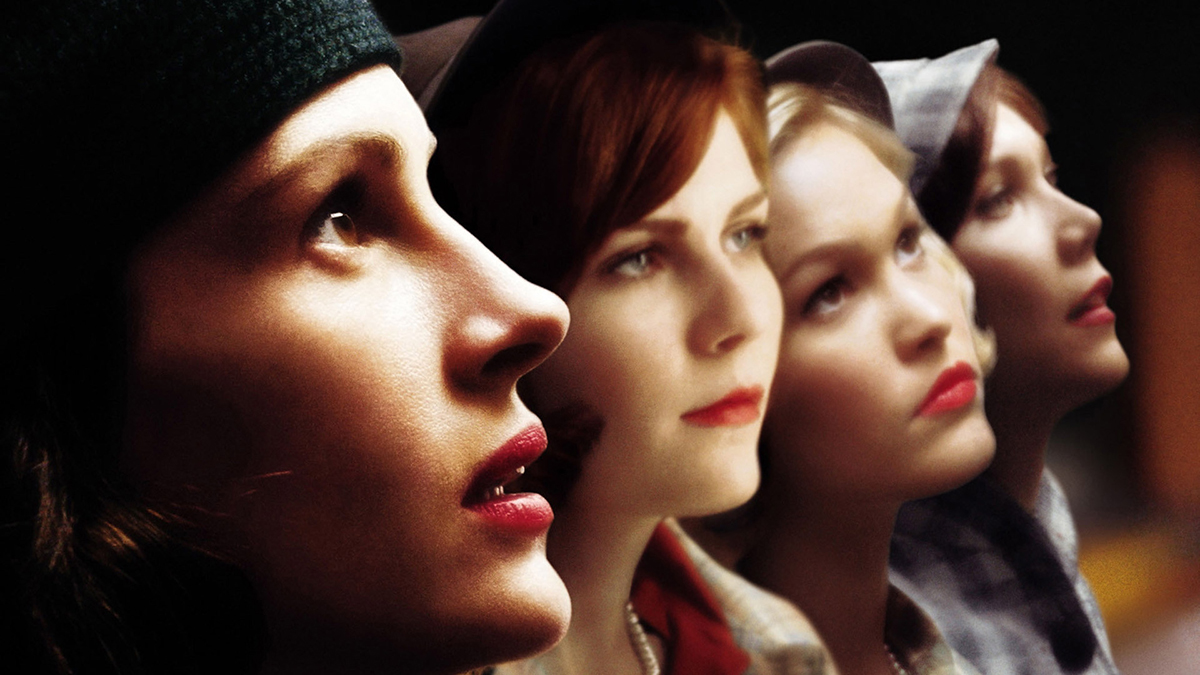 "Look beyond the paint. Let us try to open our minds to a new idea".
Katherine Watson

Mona Lisa Smile is a 2003 drama film, directed by Mike Newell, starring Julia Roberts, Kirsten Dunst, Maggie Gyllenhaal, and Julia Stiles. The title is a reference to the Mona Lisa, the famous painting by Leonardo da Vinci, and the song of the same name, originally performed by Nat King Cole, which was covered by Seal for the movie. The film speaks about a free-thinking art professor who teaches conservative 50's Wellesley girls to question their traditional societal roles.

LINGVISTOV project offers you an opportunity to improve your command of English by watching your favourite films and doing our unique exercises!

I. Who do the following words belong to? Recall the situations they were uttered in.

1. “What do you seek?” – “To awaken my spirit through hard work and dedicate my life to knowledge”.
2. “They can smell fear”.
3. “A good wife makes her husband think that everything’s his idea even if it’s not. Why don’t you see if you can’t nudge the idea into his head”.
4. “Your sole responsibility will be taking care of your husband and children”.
5. “How to measure your wife for an ironing table?”
6. “A housewife is someone who sold her soul for a center hall colonial. She has no depth, no intellect, no interest”.
7. “While our mothers were called to work for Lady Liberty it’s our duty, nay, obligation to reclaim our place in the home, bearing the children that will carry our traditions into the future”.
8. “Do I look a bit like her? I think she’s fabulous”.
9. “She compelled us all to see the world through new eyes”.
10. “There are a lot of labels here I’ve noticed. Right family, right school, right art, right way of thinking…”

II. Refer the following vocabulary to portray one of the characters.

A bohemian; a teacher of speech, elocution and poise; a classical Electra complex; progressive; a forward thinker; subversive; critical; lives by her own definition and would not compromise it; a pretty good egg; the most conservative in the nation.

III. Speak on the following.

1. Where is the scene laid? Who is the main character of the film?
2. What is the film about? Express your idea in 1-2 sentences.
3. What have you learnt about the protagonist of the film? Do you think Katherine Ann Willis differed from the other teachers of the college? If yes, in what way?
4. What were the students prepared for at WellesleyCollege? Was the girls’ destiny settled in some way? What were they bound to make? Were they satisfied with such a fate?
5. Did Katherine share the patriarchal view on the woman’s place in this world imposed by the administrative board? What was she inclined to think on this issue?
6. Did she influence the girls’ outlook?
7. Who of the girls opposed the young teacher? Can you make out the motives of her behaviour? What was the distribution of gender roles according to Betty?
8. What was Joan’s contribution to rebelling against the traditional view on the woman’s role? What did she choose in the end? Do you approve of her decision?
9. What came of Betty? Was her marriage doomed to come to a deadend? Why?
10.  Did the time spent at Wellesley have any impact on her own definition?

IV. Sum up the problem and the idea highlighted in the film. Give your personal attitude to them.