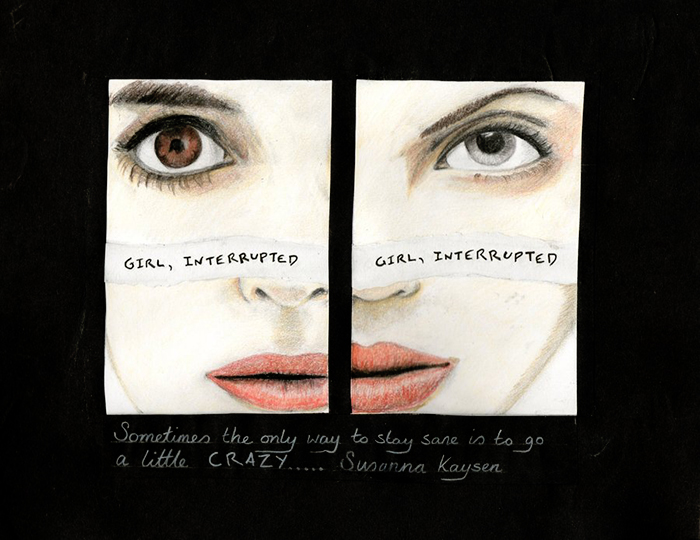 Read about the film and its analysis.

I. Study the English vocabulary from the movie. Recall the situations these words were said and use them in sentences of your own (make up 5 sentences).

to make up one’s mind; to be blue; a bunch of times; to escape; to deal with smb; to be kidding (I am kidding); outrageous; to confess secrets; a mental institution; to be depressed; a junkie; a ward; to hang out with smb; a roommate; to be puzzled about smth; to take a nap; meds; insane.

II. Find synonyms for the given words. Use the previous exercise.

III. Translate from Russian into English using the vocabulary from the movie:

IV. Who do the following words belong to? Recall the situations they were uttered in:

I know what it's like to want to die. How it hurts to smile. How you try to fit in but you can't. How you hurt yourself on the outside to try to kill the thing on the inside.

-  What happened to Polly?
-  What needs to happen? No one's ever gonna kiss her, man. You know, they're building a new Disney Land in Florida. If I could have any job in the world, I'd be a professional Cinderella. You could be Snow White. And Polly could be Minnie Mouse. Everyone would hug her and kiss her and love her and no one would ever know what was in that big head of hers, you know?

- Hello?
-  So what's your diag-nonsense?
-  Who is this?
-  What'd he say to Mom and Pop?
- I have a Borderline Personality.
-  Oh, that's nothing. What else?
-  He didn't say. Thought it would affect my recovery.
-  Alright, listen. Tongue your meds tonight. After 1 o'clock checks Gretta always goes out for a smoke. Check the mirrors and if they're clear you go down to Hector's closet. It's near the art room and it will be open.

a. weak
b. chick
c. depressed
d. strong
e. junkie
f. completely crazy
g. has escaped a bunch of times from the hospital
h. has no response to treatment
i. puzzled about her illness
j. clever
k. deals with patients at Claymore
l. controls relationships with patients

VI. Speak on the following:

Lisa: [to Daisy] Help me understand, Dais 'cause, I thought you didn't do Valium. Tell me how this safety net is working for you. Tell me that you don't take that blade and drag it across your skin and pray for the courage to press down. Tell me how your *daddy* helps you cope with that. Illuminate me.

7. What is the climax of the movie? Why did Lisa steal Susanna’s journal? What did she want to prove to Susanna?

-  What are you doing Lisa?
-  Playing the villain, baby, just like you want. I try to give you everything you want.
-  No you don't.
-  You wanted your file, I found you your file. You wanted out, I got you out. You needed money, I found you some. I'm f***ng consistent - I told you the truth-I didn't write it down in a f***g book! I told you to your face. And I told Daisy to her face - what everybody knew and wouldn't say, and she killed herself. And I played the f***ng villain, just like you wanted.
-  Why would I want that?
-  Because it makes you the good guy, sweet pea.

8. Why is the movie called “Girl, Interrupted”.

VII. Express your personal attitude to the movie. Did you like it? Why? Review people’s comments on the Internet and write an essay on this movie. The headings below can help you with that: