Lingvistov Films in English: Blue Is the Warmest Color (2013)

Directed by Abdellatif Kechiche
Starring Lea Seydoux, Adele Exarchopoulos
Blue Is the Warmest Colour is a 2013 French romantic coming of age drama film written, produced, and directed by Abdellatif Kechiche and starring Lea Seydoux and Adele Exarchopoulos.
PRE-WATCH
The movie centers on a 15-year-old girl named Adele who is climbing to adulthood, questioning her sexual identity and experiencing her first love. Do you agree that first love plays a very important role in everybody's life? Do you remember your first love?
VOCABULARY
I. Explain the following words and word combinations. Use the dictionary if necessary. Make up your own sentences. 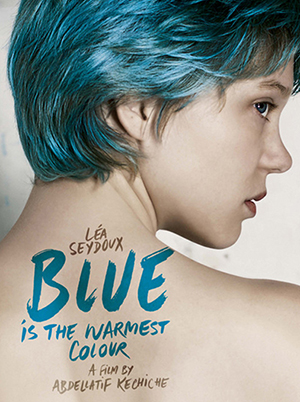 junior (student)
senior (student)
Applied Arts/ Decorative Arts/ Fine Arts
to put smb off
gross
underage
to affirm one's freedom and values
a prophet
commited
it sounds phony
a vice
to pass smth on
to have a tough time
your notes are up
to live off painting
to have an artistic side
to earn a living
to appear on canvas
to expose one's life to the world
to accentuate the line
CONTENT QUIZ
II. Recall the situations with these dialogs:
- It wasn't good?
- Yes. It was great.

But I have infinite tenderness for you. I always will. All my life long.
III. Answer the questions:
1) When sitting in the park Adele and Emma are talking about philosophy. According to Emma whose idea is that 'existence preceeds essence'?
2) What book is Adele reading on the bus to school when Thomas starts a conversation with her?
3) What does the name 'Adele' mean in Arabic?
4) Which painter does Adele give reference to several times throughout the movie?
5) Before her relationship with Emma we see Adele marching in a protest. What do the participants of the protest demand?
CHARACTERS
IV. Choose one of the main characters (Adele/ Emma) and answer the questions:
1) What is she studying?
2) What family does she come from?
3) Describe her personality
DISCUSSION
V. Answer the questions:
VI. Read several reviews of the film and write your own.
Below are some of the reviews available on the Internet:
New Yorker Review
The Guardian Review
Rogerebert Revew