Where the British Live 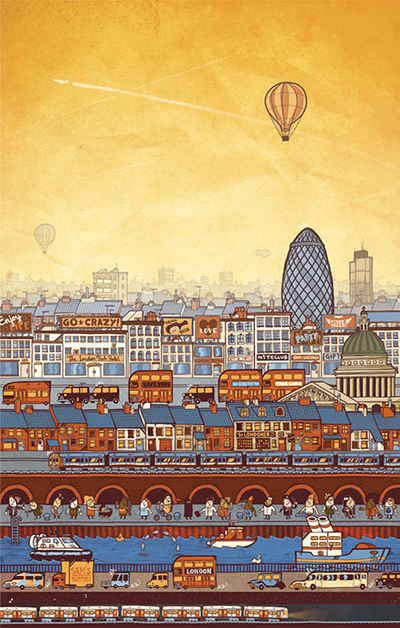 Perhaps you know that about 57 million people live in Britain today. Most of those people – at least 80 per cent – live in towns or suburbs of towns.
More than 40 per cent of people in Britain live in seven large urban communities (conurbations), whose centers are London, Manchester, Birmingham, Glasgow, Leeds, Liverpool and Newcastle-on-Tyne.
The typical home of an English family is still a house rather than a flat, despite the ever increasing number of blocks of flats which are being built. Local councils find it increasingly difficult to build houses to let because of the high cost of land and a very high rate of interest.
A young couple about to marry know that there is a large waiting list for council built houses and flats. To rent a flat or a house from a private landlord is often very expensive. The tenant has to sign an agreement for a period of years, and when a new agreement is drawn up he may be asked to pay a higher rent. And if he cannot pay the new rent he can be turned out (evicted) from his home. So, many young couples try to buy a house of their own if they possibly can. If they are in reasonably secure jobs and if they are earning more or less the average national wage, a bank or building society will lend them the money to buy a house. They must be able to pay the percentage of the cost of the house in cash, and the loan from the bank (called a mortgage) has to be repaid over 20 to 25 years, plus interest on the loan.
Imagine what happens if the husband loses his job or goes on short-time. Imagine what happens to the household budget if the bank-rate goes up one or two per cent. Imagine how rising prices demand more and more of the housekeeping money and the problems it brings for maintaining the mortgage repayments.
For thousands of young workers earning less than the average wage there is no prospect of bank loans nor of council houses; but at the other end if the scale there are people who have no problems of this kind, A glance at the property advertisements in papers like ‘The Times’ shows that there are still buyers for houses with six, eight or ten bedrooms at prices to ? 60.000 and tenants for flats at rents of up to ? 70 a week.
The suburban houses, in which a large majority of families live, vary enormously but have clear class characteristics. An upper-class suburb will be situated in pleasant surroundings and consists of large detached houses with four or more bedrooms, set in large gardens and approached through tree-lined streets. The less well-to-do family may live in a suburb of cheaply built semi-detached houses with pocket-handkerchief gardens. The ugliest of suburbs are to be found near the centers of big industrial towns and may consist of old Victorian villas, or dilapidated tenements, housing thousands of working-class families in unhealthy and depressing living conditions.
In a very few places progressive town councils have built new suburbs, trying to create a community by planning the housing round a shopping center and providing it with schools and recreational buildings. There are even one or two completely new towns, often designed by first-class architects, which present an attractive picture to the visitor.
But Britain still has an acute housing problem. Why is this? There is no lack of building material in Britain and no lack of skilled or unskilled workers. Perhaps the answer can be found in the story of one man, who started by buying a piece of land for ? 35.000 and selling it at a profit. Buying and selling land in this way he made a fortune of three million pounds in seven years. Property speculation is a respectable business in Britain, but who really pays?


Learning Activities
Skimming
5.1. Agree or disagree with these statements. While speaking use conversational formulas.
1. The typical home of an English family is rather a house than a flat.
2. Local councils build a great number of blocks of flats to meet the requirements of the population.
3. A young couple can get a council-built house or a flat as soon as they are married.
4. If there is a long waiting list for council-built houses a family can rent a flat.
5. When renting a flat no agreement is signed.
6. It is beyond people’s means to buy a house of their own.
7. All those who want a house of their own can borrow money from a bank or a building society.
8. Unemployment is a constant threat to many families.
9. It is next to impossible to sell a large and luxurious house with six, eight or ten bedrooms.
10. In Great Britain people prefer to live in the heart of the city.
11. There is no housing problem in Great Britain.
Scanning
5.2. Answer the questions:
1. What is the typical home of an English family?
2. Why don’t the local councils build more houses to let?
3. What are the prospects for a young couple to get housing?
4. What may happen to the tenants of privately owned flats?
5. Where can one borrow money to buy a house or a flat?
6. What are the conditions on which people can get a loan from a bank or a building society?
7. What risk do people run when they borrow money?
8. What is typical of a working class area?
9. What does an upper- middle class area look like?
10. What are the reasons of the acute housing problems in Great Britain?
11. What are the possible ways of solving the housing problem in Britain?
Related Activities
Word Study
5.3. Transcribe, mark the stress and practise the reading of the following words:
a)
b) London, Newcastle-on-Tyne, Manchester, Birmingham, Glasgow, Liverpool, Leeds.
5.4. Find the words and phrases similar in meaning:
in spite of, to turn smb out, great, situated in, falling to pieces, first-rate, need for housing, to begin, reliable, to lend.
5.5. Give the words and phrases of the opposite meaning:cheap, to have a full-time job, to lend, to go up, wealthy, healthy, to depress, to buy, small.
5.6. Give nouns and adjectives of the same root. If necessary use an English-English dictionary:
to vary, to design, to agree, to depress, to provide, to attract, to respect, to advertise, to pay, to evict, to imagine, to approach, to increase, to reason.
5.7. Give the three forms of the verbs:
to find, to fall, to rent, to cost, to draw, to pay, to lay, to lend, to loan, to rise, to raise, to vary, to design, to smell, to lack.
5.8. Define each of the following words. If necessary consult an English-English dictionary and be ready to explain them to the teacher:
rent, tenant, landlord, block of flats, local council, council house, detached (semi-detached) house, suburbs, outskirts, to loan, to lend, to borrow.
5.9. Explain the following word-combinations. Find the sentences they are used in:
to be in a reasonably secure job, building society, to go on short time, property advertisements, upper- middle class, Victorian villa, pocket-handkerchief garden, dilapidated tenements, recreational buildings, property speculation, to draw up an agreement, to pay in cash, interest on the loan.
5.10. Study these words:
5.11. Fill in the missing words. Use the words from the list in the above left-hand column.
The government plans to increase __________s by 5% over the next year. The company pays its employees good __________-s. What’s your yearly __________-? “All __________-s, please!” cried the conductor. When prices rise, students find it difficult to live on a __________. He let the house at a __________- of ? 30.00 a week. He gave the waiter a __________- when he paid for the meal. What are your weekly __________-s? The parents paid the child’s school __________-s.
5.12. Suggest the English for:
снимать квартиру, сдавать квартиру, выгодно продать, составить состояние, проектировать, городская агломерация, муниципалитет, отдельный дом, квартиросъемщик, торговый центр, владелец дома, приходящие в ветхость жилища, иметь постоянную работу, 56 миллионов, 80%, выселять, перейти на неполный рабочий день, первоклассный архитектор, жилищные условия, плохие для здоровья, многоквартирный дом, острая жилищная проблема.
5.13. Rephrase the following sentences using the words and word-combinations from the text:
1. The house was situated in an area which was distant from the center of the town.
2. They had not spent much money on building the house.
3. The landlord is going to make them pay more money for the flat.
4. We don’t need to share our house with people.
5. I asked him if he would give me a room to live in.
6. They lived in an area of old deteriorated houses.
7. They occupy a large and spacious house.
5.14. Complete the following sentences:
1. Thousands of working class families live … 2. The less well-to-do families may live … 3. The upper-middle class suburb is situated … 4. Local councils find it increasingly difficult to build houses because … 5. If a person is in a reasonably secure job he can … 6. Despite the ever increasing number of blocks of flats … 7. A young couple can hardly hope … 8. A family can be evicted from their home if … 9. A person that wants to buy a house of his own … 10. If the husband goes on short time or loses his job … 11. Property advertisements in papers like ‘The Times’ show that … 12. Britain has an acute housing problem because …
5.15. Study the use of the prepositions. Make up sentences with the expressions given below.
AT: at my place, at the seaside, at 10 Downing Street, at price, at rent, at Victoria Station;
IN: in London, in Trafalgar Square, in the street, in Downing Street 10, in pleasant surroundings, in the countryside, in the suburbs;
ON: on the Thames, on the outskirts.
5.16. Fill in the blanks with suitable prepositions:
5.17. Sum up the information about the housing system in Britain.
5.18. Supply more information about the housing system in Britain (use the Internet).
5.19. Comment on and illustrate the proverb: My house is my castle.