Raising a G-Rated Child in an X-Rated World
Yes, it can be done.
Here are some ways to accomplish it. 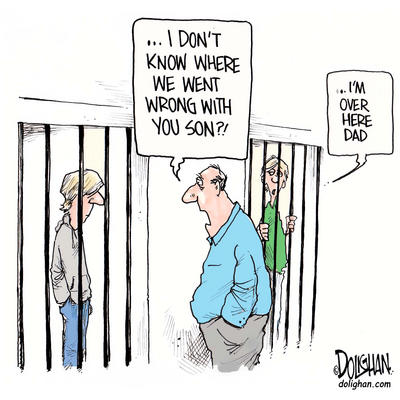 The Los Angeles- Based Josephson Institute of Ethics found in a national survey that 33 percent of high-school students has shoplifted in the previous 12 months and 61 percent had cheated on an exam. Said one student, “Ethics in today’s society? What a joke!” At times it seems that we are raising a nation of moral illiterates. Plainly, our modern culture comes up short on moral instruction. As former Secretary of Education William J. Bennett puts it, “For a long time, most of us knew and agreed on the answers to questions children have: ‘Why shouldn’t I smoke dope? Why shouldn’t I have sex?’ But in the late 1960s and early 1970s we became afflicted with cultural doubt. Too many adults forgot the right answers”.

A growing number of parents, however, are fighting back. They are determined to teach their children such moral values as honesty, courage and self-control. In the face of what can seem like insurmountable odds, they are showing how it is possible to raise a G-rated child in our X-rated world. Here are some parent-tested solutions that work:

1. Tell your children what you value. When we want to teach a kid to play football, we toss a pigskin around. But when it comes to teaching morality, many parents believe that if they love their children and treat them kindly, the kids will know how to behave. Unfortunately, with so many immoral messages floating around, you can’t assume your child will live by your values.

One Los Angeles father recalls sadly that when his daughter went to college, her attitudes toward premarital sex changed overnight. “She started sleeping with one young man after another”, he says. “My wife and I had talked to her about AIDS, but not about sexual morals. We thought she knew where she stood”.

Richard and Linda Eyre of Salt Lake City are the authors of Teaching Your Children Values. When the first three of their nine children were toddlers, the Eyres started their own at home “value school”. Each month, using games, stories and traditions, they teach a different moral value. During honesty month, for example, they draw up an “Honesty Pact” and the family vows always to tell one another the truth. When working on self-discipline, they bestow the W.B.P. (Work Before Play) Award. This paper “plaque” is given each week to the child who displays the most self-discipline – perhaps by finishing homework before playing with friends or by tidying his room before going out.

Why reward a child for doing the right thing? “Because a prize – even a paper plaque – lasts longer than praise for young children and has a stronger effect”, explains Richard Eyre.

2. Give reasons for your rules. When our children were in grade school, I vowed that they would never choose drugs because they didn’t know the facts. I wrote the National Clearinghouse for Alcohol and Drug Information and requested booklets and pamphlets about dangers of drugs.

In about a month, I received a giant carton of free publications on every drug from cocaine to pot. I put all the studies in an old blue suitcase; it must have weighed 100 pounds. I said to my kids, “All the reasons not to take drugs are right in this suitcase”. Then I read them some of the more shocking findings. Years later my 19-year-old daughter, Erin, admitted that she’d been curious about drugs, but that the weighty suitcase full of hard facts had convinced her not to try them.

3. Focus on how the person feels. “When we emphasize with people, we also have a strong impulse to help them when they’re in trouble”, explains child psychologist Michael Schulman, chairman of Columbia University’s Seminar in Moral Education. “One of the people who risked his life to save Jews during World War II was asked why he had done so. He replied ‘When someone knocked at my door, the hand of compassion was faster than the calculus of reason”.

Schulman relates the story of a 17-year-old from Bloomfield, N.J., who was fired in his second week on the job as a mechanic’s assistant. When his mother asked why, the young man replied, “They told this guy they’d fixed his car. I knew they hadn’t – so I told him so. All they did was adjust the carburetor to make it sound better”. He knew the man was planning to drive to Canada with his family and pictured them stuck in the middle of nowhere, their vacation ruined. “I couldn’t let that happen”, he said.

Schulman attributes the teens honesty to his ability to put himself in the other guy’s shoes – to emphasize. “To teach your child to emphasize, use the word feel often”, Schulman adds. “Ask, ‘How do you think your brother feels when you call him names?” Discuss how victims of prejudice must feel and help your child to be sensitive to those feelings.

4. Recognize the power of guilt. In our society, guilt has almost become a dirty word. Books have been written just to help people rid themselves of this supposedly neurotic feeling. But guilt is the nagging voice of conscience. When your child does something wrong, don’t rush to bolster his self-esteem and make him feel better about himself; let him feel guilty awhile. As June Tangney, an associate professor of psychology at George Mason University in Fairfax, Va., puts it, “It isn’t always bad to feel bad”.

In Bringing Up a Moral Child, Schulman recounts the case of a seventh-grader from Brooklyn, N.Y., who stole an unattended handbag from a library table. She was delighted with her booty - $17 in cash, a pen and a bottle of perfume. But guilt slowly overtook her and she started to cry. Realizing how sad the other girl must feel over the theft, she found the owner’s name and address on an identification card and returned the bag with all its contents. “Even if a child gives in to temptation’, says Schulman, “the pain of a guilty conscience can motivate her to make amends”.

“A child who feels guilty feels bad about a specific behavior and is more likely to apologize and somehow set things right”, says Tangney. She adds, however, that you should avoid making your child feel bad about herself. “That child may either withdraw in depression or lash our in anger”.

Focus on the child’s behavior by saying “That was a bad thing to do” (not ‘You are a bad person”), suggests Tangney. Then offer ways for the child to fix what she did wrong. Afterward, praise the child (“You were very brave to admit you made a mistake”).

Notes on the text:
family vows – a serious promise
to bestow – to give someone something of great value or importance
cocaine – a drug, usually in the form of a white powder
pot – old-fashioned marijuana – drug smoked like a cigarette, made from the dried leaves of the hemp plant
to lash out (inf.) – to suddenly speak angrily to someone
pigskin (to toss a pigskin around) – AmE (informal) the ball used in American football
to bolster – to help someone feel better and more positive
booty – (especially literary) valuable things that a group of people, especially an army that has just won a victory, take away or steal from somewhere.


I.    Suggest the Russian for these word combinations:

II. Enlarge on the following:


III. Challenge or support the following:


IV.   Study the text and find synonyms to the following adjectives:

words: to emphasize, to bestow, a vow, illiterate;
word combinations: to cheat on an exam, the hand of compassion, the calculus of reason, to recount the case.