FARINELLI,
or a comment on recreating the voice
of a castrato by fusion of timbres. 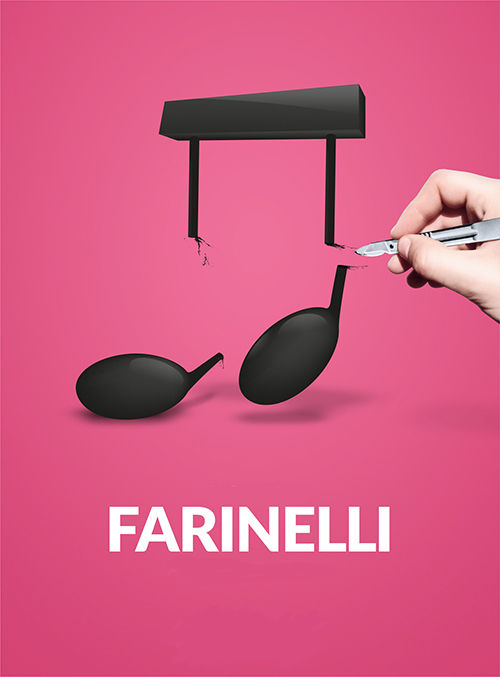 Carlo Broschi, called Farinelli (1705-82), is known as one of the most famous castrati. Obviously, we have no recording of his unique voice. For the needs of he movie of Gerard Corbiau, devoted to this singer, Stephan Films and Auvidis have both recreated an unheard voice, quite beyond the reach of modern human performance, using digital techniques of sound processing.

The golden age of castrati lasted for two centuries, from the beginning of the 17th century to the dawn of the 19th century. First, they sang exclusively in religious choirs, but soon became used in musical dramas. The usual explanation given to justify the use of castrati was that women were forbidden to sing in church choirs or theatres in the Papal States. However, the real reason for their extraordinary popularity was their vocal supremacy.

The whole of Europe was infatuated with castrati. They were received deliriously wherever they performed. They were idolised as much as today’s androgynous rock stars, such as Michael Jackson or David Bowe.

Castrati were particularly known for their unique timbre: because of the surgery performed on them, their voice did not change with puberty. Upon adulthood, the size of their thoracic cage, their lung capacity, their physical stamina and their strength were usually above that of most men. They had, as a consequence, great vocal power, and some were able to sing notes for a minute or more. Finally, a small and flexible larynx, and relatively short vocal chords allowed them to vocalize over a rather wide range (over 3 and 1/2 octaves) and to sing with great agility (they could control wide intervals, long cascades and trills). Furthermore, castrati were initially selected among the best singers and received intensive training.

Castration was banned in the 19th century, and the last castrato in the Western World died in 1922. Castrati were virtuoso musicians, exceptionally talented and trained. Almost nothing in their repertoire can be performed nowadays.

The greatest difficulty in making a movie on a castrato is the absence of recorded material. The last castrato in the Western world, Alessandro Moreschi, recorded less than one hour's worth of singing on wax cylinders between 1902 and 1904. The technical quality of this historical recording is such that it is impossible to obtain acoustic data from it, and it serves only as an indicator of the general aesthetic qualities of the voice.

So as to recreate a voice true to the original, we started from the notion that we had to call on performers of today, and, with the help of techniques developed recently, transform their natural voices so as to obtain a timbre close to that of a castrato.

To better identify this lost voice and to define its characteristics, we have taken into account the physical traits of the organs involved in voice production in a castrato, the general aesthetic qualities of the available historical recording, and of descriptions of the singing found in written accounts. The movie director and the musical adviser to the movie were also involved in the artistic choices.

We have attempted several approaches, starting from a bass, a tenor, an alto, a countertenor and a coloratura soprano. Because of the very wide vocal range, we have decided to use both a countertenor (Derek Lee Ragin) and a coloratura (Ewa Godlewska) who used similar singing techniques (especially with respect to vibrato and articulation).

After the selection of the singers, the processing took place in two stages. The first tried to recreate the melodic line of the castrato voice based on recordings of the two singers. This was done by splicing the parts which could only be sung by the countertenor with those specific to the soprano. This subtle editing work was sometimes done note by note.

The second stage was to blend the timbre of the two voices. A timbre close to that of the countertenor, itself quite characteristic, was chosen as reference. This voice was nevertheless processed to give it a younger quality, in particular removing certain noisy aspects. The voice of the soprano was then modified more dramatically by transforming it toward that of the countertenor. Additional processing was required to produce certain effects such as very long notes which could not be sustained by today's singers. These notes were wholly synthesized with elements sampled from other parts of the sung material.

To implement these subtle transformations, we have used programs developed as part of our research and developed other programs specially for this project. In particular, each vowel was analyzed, identified in terms of its nature, pitch and amplitude, and transformed in a particular way. Graphical tools were used to compare analyses and modify them in real time for testing purposes. A special synthesizing was used to create long vowels.

The digitalized sound was processed on one of the most powerful workstations, provided by DEC France for the purposes of this project. In all, 45 minutes of vocal material were transformed to produce the soundtrack of the movie, thus allowing to bring back to life some of the repertoire.

6. Answer the questions.
1. What were castrati initially selected for?
2. What was the secret of castrati’s unique performance?
3. What response did their singing receive from the public?
4. Did castration guarantee success and recognition to those who underwent it?
5. Do you think castration was a crime? If you had lived in those years would you have protested it?
6. Is it possible for modern singers to approach the performance of castrati?
7. What modern means can help to approximate modern performance to that of a castrato?
8. What steps had to be taken by film-makers to recreate a voice true to the original? What timbres served the foundation for it?
7. Use the expressions from the text in a dialogue between:
A: music supervisor of the motion picture Farinelli;
B: journalist interviewing him on the production of the film.