The Adventures of a Bearded Man in a Beardless World 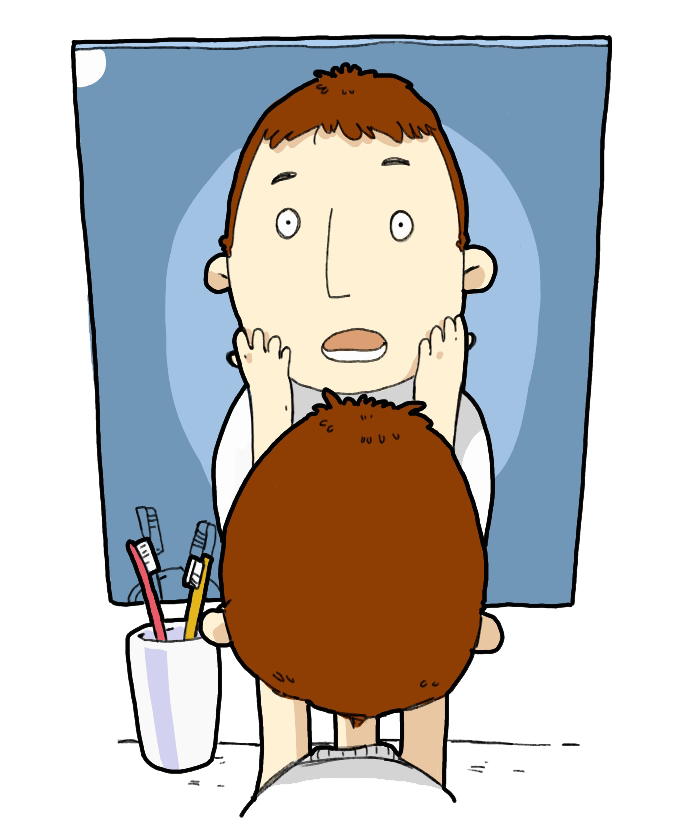 A tragedy fell upon a world of men. One horrible morning the bearers of Y-chromosome throughout the planet looked into reflecting surfaces, be that a mirror or a puddle, and saw that their facial hair was mysteriously disjoined from them while they were asleep.
Nothing was left, not even a tiniest piece to make memory of. That very day thousands of women applied for divorce. Shaving machines manufacturers went bankrupt, as did false beard designers because since then everyone knew for sure they were false. The vast majority of men admitted to feeling “sterilized”. That became known as Beardaster.
And yet one man was unaltered that grievous day. Richard Barbidge’s natural scarf remained held tightly to under the skin of his face.
You can guess that the attention of broad public, annoying media and cunning government was drawn to Richard Barbidge immediately after the Beardaster. He had few hours to muster his stuff and will and go recluse, but his ignorance of the catastrophe cost him the harmonious and happy life he had had before.
His mailboxes, both real and digital, and his profile in Facebook exploded with thousands of letters from thousands of frenzied women who wanted him and only him for their husband. “I adore you, Richard!” “You’re the man of my dream, Richard!”

“Will out children be able to grow beards too, Richard?!” “How exactly long is your beard, Richard?” As if she cared! Our hero, being a 21 years old IT-student with a 21 millimeter beard, had never been object of attraction. The tons of love pressed on him heavily, so he decided that he should somehow act in order not to be buried under the mass of woman bodies. Richard Barbidge’s prowess at Photoshop allowed him to create a delusion that he had shaved his facial hair. The effect was fabulous. His triumph was epic, but did not last. The trick won him only one day of rest, most of which he spent lying in a bathtub washing his beard, playing with it and talking to it. 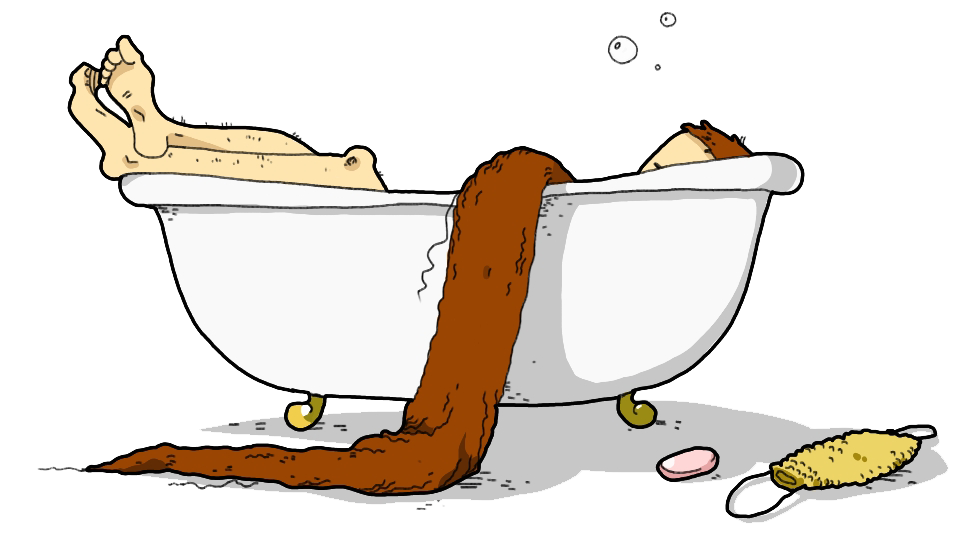 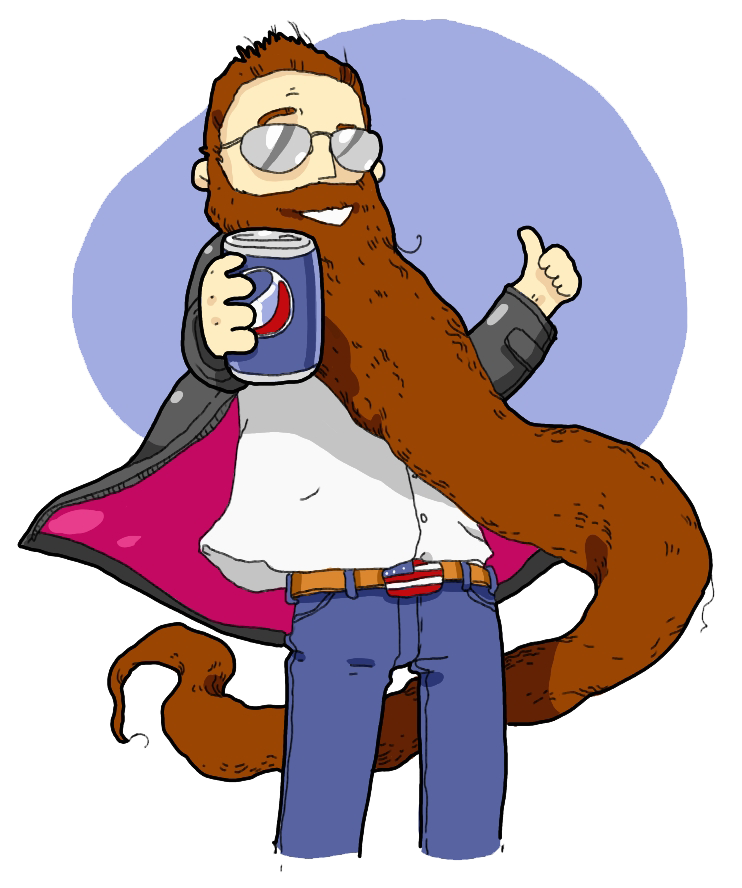 Part 2
Richard Barbidge survived two weeks after the Beardaster and even started to be getting used to it. Needless to say, women had been a problem for him – they always were, but in an absolutely different sense. However, there were other forces that wanted Richard Barbidge – again, in a different sense. The one and only bearded man in the world had to ask one of the world’s strongest for protection. Who is best at making and promoting sensations? Media! They immediately took Richard Barbidge under protection in a luxurious penthouse is a skyscraper, but at what cost! Our hero had to use what he held dear for mundane advertising! His beard grew thicker and more awesome with every day, but the agreement he made with the media didn’t allow Richard to draw pleasure from looking – for more than half a day he was forced to take part in photosets and ad videos for companies small and big. His beard was painted and repainted, adorned with you better not imagine what, deformed and misshaped. Money flowed, but Richard Barbidge wasn’t happy. He lost count of days, but he would clearly remember for all his life the day when he heard the rattle of helicopter blades by the window of his apartment…

Part 3
The helicopter came in the black of night. Richard Barbidge, a prisoner of mass media in the golden cage of the penthouse, was incredibly glad to hear the cutting sounds of blades and see the bright shafts of light. The glass of the apartment was broken by a man clinging to a rope. “I am a government agent,” he said. “Come, Mr. Barbidge, we will work with you.”
Richard Barbidge came, and the rope was lifted the same moment security guards rushed into his former accommodation. Their curses were music to his ears.
However, it soon revealed that the government agent had lied to our hero. The government didn’t work with him; it worked on him. On his unique beard in particular. Richard Barbidge was immobilised, and the torture began. There was no pain, but it was torment to watch what agents in black were doing with his precious beard. They pulled at it, tore it, but what a miracle – the beard was unharmed. Richard Barbidge was no less amazed than his executioners were. They applied harsher methods – tried to set the beard ablaze, to electrocute it, to chemically annihilate it, all in vain. At long last, Richard Barbidge cried out “Why me? Or rather, why my beard?” “Your beard is too similar to that of Fidele Castro. The government major said angrily. “The underground movement can make of you their symbol and idol.” “What are underground movement?” Richard Barbidge wondered.
This very second the wall behind him exploded. There was some shooting, and the government agents fell on the floor. Richard Barbidge was released by someone and upstarted.
The young man before him reached his hand and said “Welcome to underground movement Who if not US,” said the man solemnly, “My name is Edward Snowden. Pleased to meet you, Mr. Barbidge.” 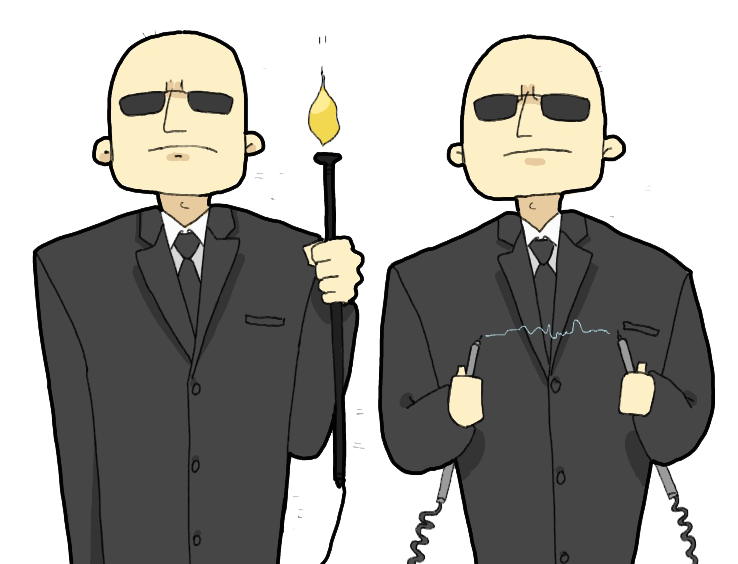 Our hero, happily blessed with facial hair, was taken by the semi-legendary Edward Snowden to the underground of the USA. The man’s multiple applications for political asylum was but a deceive; officially, he resided in Venezuela and was, according to the media, sipping cocktail after cocktail lying on some beach surrounded with curvaceous Latin muchachos. In fact, he organised a rebellious movement “Who if not US” and embarked on a sacred mission.
“You see,” he said to Richard Barbidge. They were sitting at a table in a subterranean bunker. “When the Beardaster fell, the US government saw an opportunity they could not but grasp. All world dictators lost their signs of masculinity, resolve and leadership, and people started looking up to Westernised beardless politicians. You, Mr Barbidge, are the one and only bearded man left on the planet. If you were a citizen of some Middle East country, you would have already been made a president, or sheikh, or whatever their hierarchy looks like.”
“But I don’t want to be a ruler,” objected Richard Barbidge. “I am a simple man.”
“Exactly,” smiled Edward Snowden”. “Which is why our plan is to restore beards to the world’s male population. All of them, even to those who have long ago, before the Beardaster, lost hope to grow facial hair.” He scratched his chin.
“I am ready to do what I can,” said Richard solemnly. The charisma of Edward Snowden moved him to act.
“Our scientists will examine your beard carefully… and then we will have to transport you somewhere”
“What for?” was Richard Barbidge’s outcry.
“You will know after your beard has been studied.”
So it was. A thorough examination of our hero’s organism began. Women were not accepted to the laboratory for understandable reasons. The results showed that Richard Barbidge’s facial hair grew at speed of 15 nanometers a second – or three beard-seconds, which was three times faster than average! Needless to say, his beard had already turned into a natural scarf. Also was taken and copied the blueprint of his DNA.
“So, what do we do now?” asked Richard Barbidge.
“We’re flying to Haiti!” declared Snowden, ignoring surprise in our hero’s face. “Time to combine genetic technology and voodoo magic!” 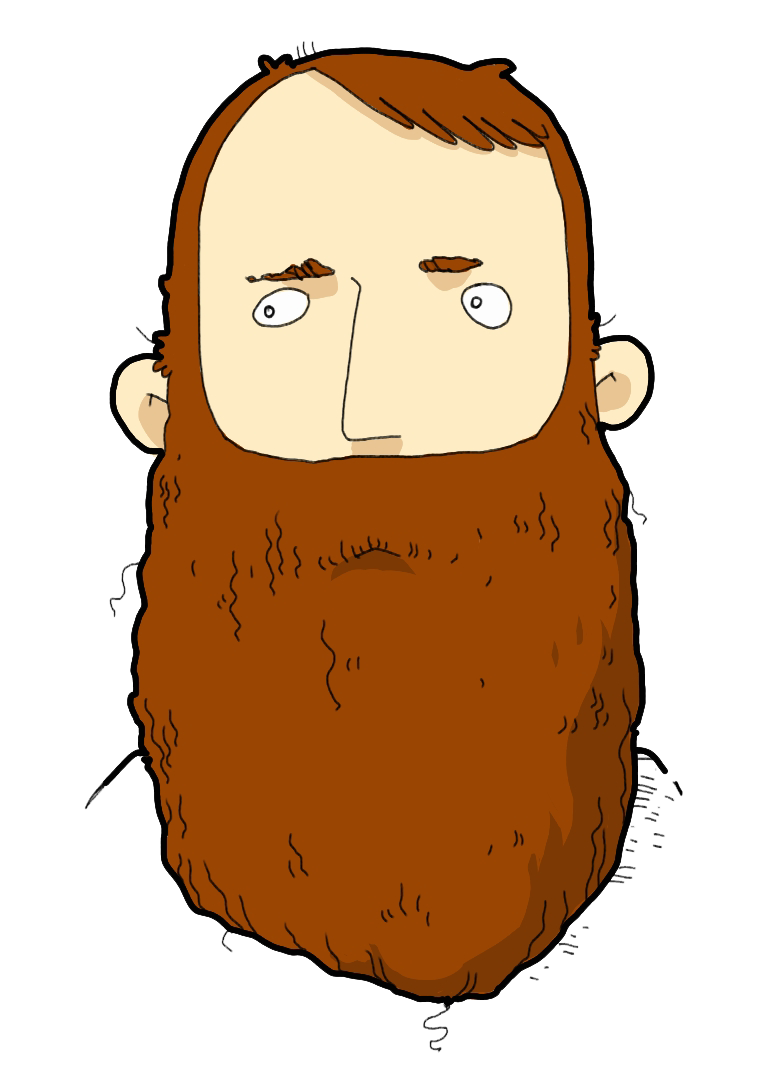 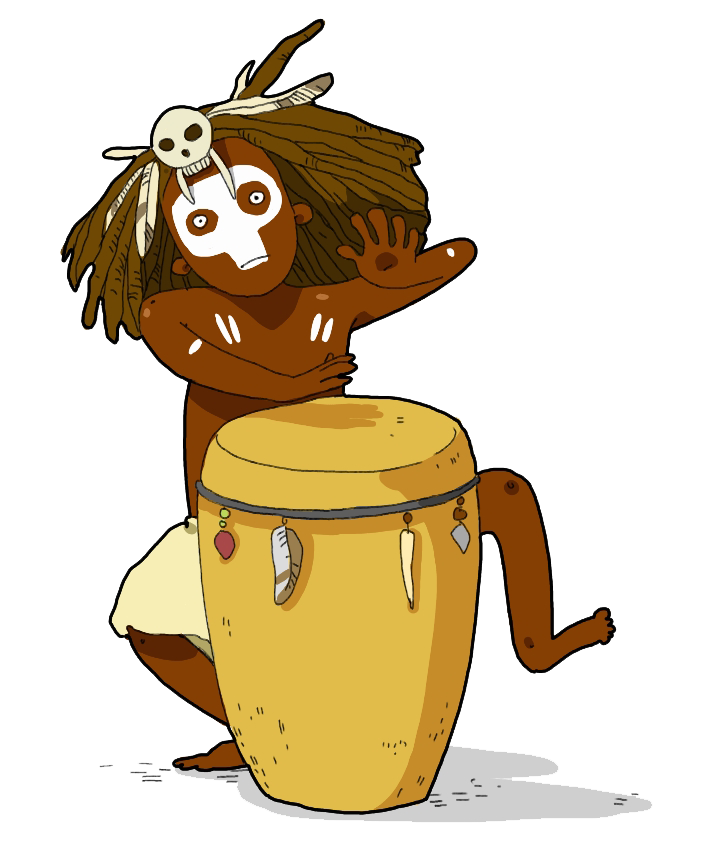 The Western, Latin American, Slavic and Asian worlds have adapted to life without beards. The cult of beard remained strong only in three parts of the world. In the Arctic the problem caused by the Beardaster had been quickly solved by wrapping more mufflers around scientists’ necks. In Scandinavia… well, the cult of beard in Scandinavia was simply one of the ridiculous American stereotypes. Even the Beardaster was unable change it, and many American women moved to Sweden or Norway to find nothing there except dullness and fjords.
And only the Middle East truly raged. The flammable region exploded with conflict between the beard adepts who believed that beards would be returned to their leaders and the beard haters, who were in a narrow minority but were supported by the West. The ideological struggle couldn’t be appeased by any measures but one.
Not a nuclear war, mind you. Of Middle East countries, only Israel presumably has nuclear weapons, and Jews are obviously beard-lovers. The fate of facial hair was to be decided on the island of Haiti, amid its jungles, where our hero, Richard Barbidge, had been brought to meet a voodoo conjurer Bab Nan Figi Yo, which in Haitian Creole means “hair of the face”. He wished the return of his beard so much that when Richard Barbidge arrived everything was ready for a global spell.
The conjurer had fashioned a voodoo doll as tall as an average male dweller of planet Earth. Rebel scientists had completed the witchcraft with a multitude of tubes, which had to imitate the growth of artificial facial hair with Richard Barbidge’s DNA.
“What is expected of me?” asked Richard.
“Nothing” said the conjurer with a flauvory accent. “Just watch and enjoy my mojo”
“I can’t wait to grow a full beard and be a true diehard rebel ass!” declared Edward Snowden. Yeah, he was there too.
The show began.
The conjurer started to jump and leap around the doll. At the same time, engineers turned on the apparatus that was responsible for the beard. Richard Barbidge, leader of underground movement and few other men were staring at the conflux of magic and technology.
Suddenly the doll began to shake. It shook so desperately that Richard Barbidge realized he feared for it. Richard’s eyes were focused on the doll’s featureless face.
Then it began to grow its predesigned feature.
Artificial hairs emerged one by one from invisible holes in the doll’s chin and cheekbones. In combination with the voodooist’s rite, it felt and looked so abnormal and supernatural that Richard Barbidge panicked. He was immobilized by stupor, his heart raced, his mouth was arid. The process of beardification was so abominable that our hero almost lost consciousness.
When it ended, and he saw that all the men around him were variously bearded, Richard Barbidge switched off. 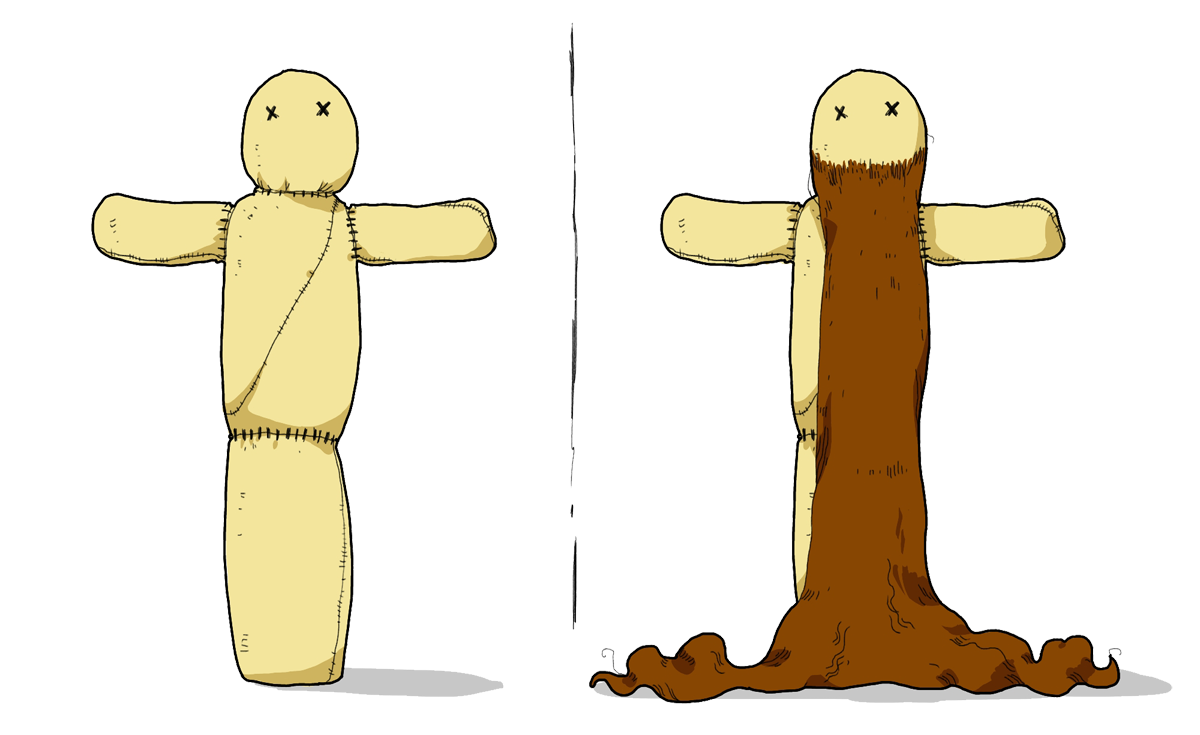 Epilogue
The next morning after the grand mojo the world’s male population was stunned. Every single one with an Y-chromosome found his face covered with beard. Then it was obvious that all these beards were identical.
That day became known as the Beardurrection. A third of men shaved their beards off. Among them were beard haters in the Middle East. The confrontation didn’t even pause. Edward Snowden’s plan failed. By the way, he belonged to another third, who shaped or cut their beards; sorrowful, Edward left a stubble of his facial hair, became a human rights defender and flew to China to evade American justice. The last third of men’s mass let their beards grow longer. Of those, Scandinavians cherished their new features the most. They no longer were stereotypical.
“Where is Richard Barbidge?” you may ask after all. His experience from the voodootechnical rite was so consuming in its horror that he has developed a strongest pogonophobia. Richard had abandoned his last name and burnt his own beard. He now lives as a recluse to never see another one again.
Thus ends the tale of the sacrifice of a Bearded Man to a Beardless World.